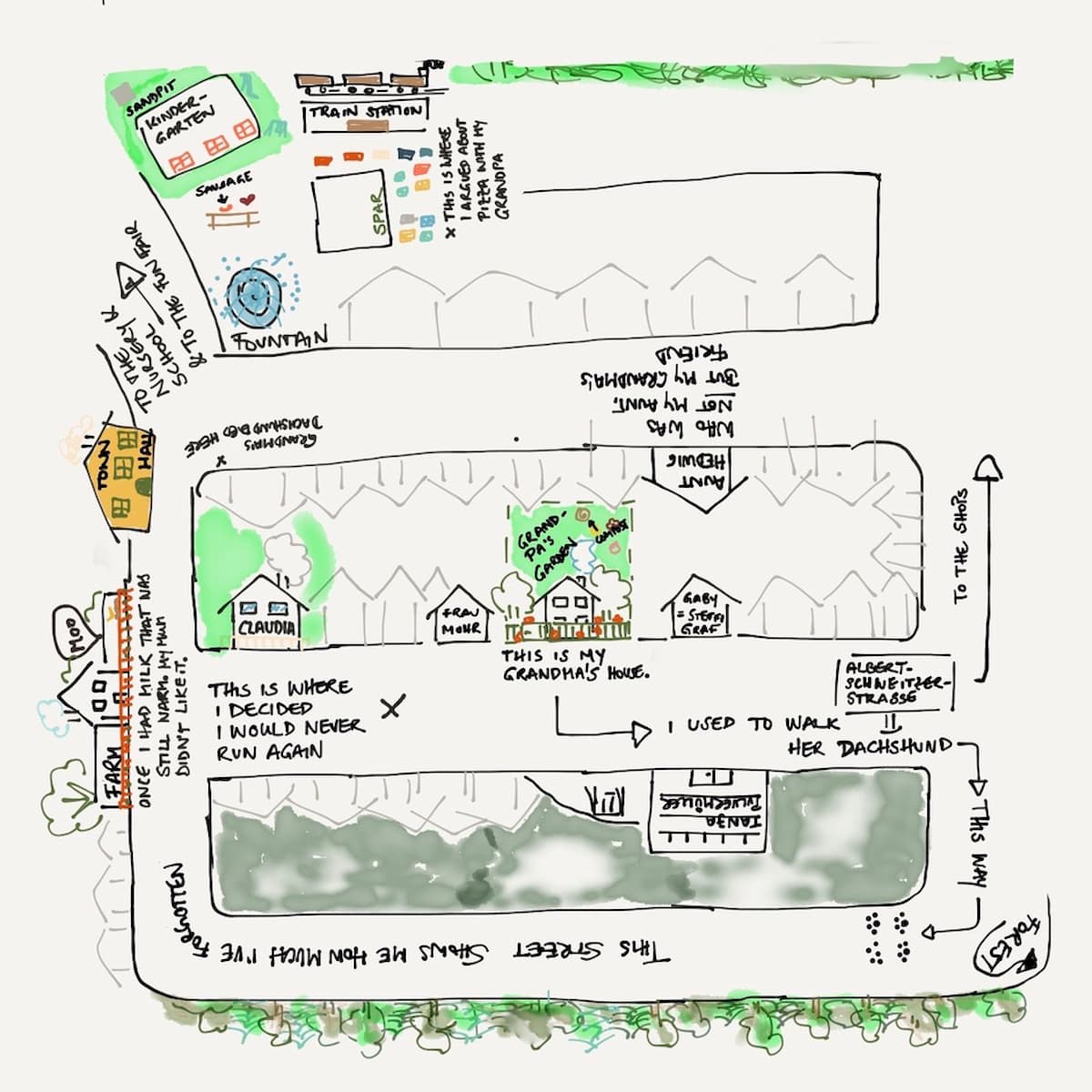 In 2017, I wrote and edited creative responses to that question – as part of the project 26 Memory Maps.

As Neil Baker explains on the 26 website, the project revolved around the following challenge:

First, create a “Memory Map” of the place you are from. It might be a rubbish pencil sketch with little artistic merit. Or a beautifully crafted topographical masterwork. Either way, it will be fascinating – because it is uniquely yours.

Second, write a “memoir” about that place. To provide a focusing constraint, it must be exactly 150 words. Many of the writers also recorded a reading of their work.

Third, tell us about your creation journey. How did you find the map-making and memoir-writing process? This must be exactly 100 words.

And as a creative variation…. if you like, sit with someone else and make their map instead. Then write their memoir.

View the entire project here — or read my contribution here.

There’s a video gone viral about our shared DNA
despite a sea of separating channels:

lost eyelashes are reminders that you instantly clear
like iPhone notifications — instead, drifting

through perpetual Monday as you try
to stay untouched by the urgency, to keep

the Gary Glitter of a 1980s Saturday night,
the comfort of shepherd’s pie, of not thinking

that even under your toenail
there’s a merry-go-round on the village green.

Speaking is silver, TED Talks are golden gate bridges.
So let’s stay soft. Be impeccable with our words.

Make the hostile environment an illusion.
We all do our best till we’re leaving.

In summer 2019, I took part in the 26 project 26 Trees — in collaboration with the UK Woodland Trust.

I wrote a poem and multilingual poetic essay, and edited the work of other writers.

Later in 2019, we published the project as a book.

You can read my poem and essay here — or click here to see the entire project.

friends keep telling me to ask
the universe for things, to tell it

I’m ready
to trust the universe

is like puff pastry, to peel
layer after layer of purple sheets, fragrant
with the endless possibilities
of rearranging the future

inspired by the Pet Shop Boys

Her mother had made the cone
from soft pink cardboard, cut
hearts and cats from purple paper
and attached a stretch of doilies to the side.

Her mother had made the jumper,
knitted the pink pig pattern and stripes
set in silver on cool summer evenings,
while her father worked.

Though it looks like the first,
this was her second day at school.
Looking back, I recognise the angles
of her fingers, her ears poking through strands of hair.

All her future impatience contained in that smile.

January: At last! May gets tough on kittens
Kittens made to pay an extra £200 a year for care in the NHS
Fury at secret bid to water down catification curbs
Tough plan to cut catification is just what Briatin needs

May: Kittens destroying EU
We are importing huge numbers of welfare kittens
PM urged to get tough on work permits for kittens after Brexit
2.37 million kittens work in Britain

June: Growing crime wave as 50 kittens arrested a day
Britons on alert after kitten mob attack driver with a brick
Anger as EU insists on rights for kitten criminals in Britain
Brexit talks must not lose sight of kitten issue

July: If we don’t cut all ties with the EU… 1.2M more kittens will head to Britain
We must stand firm to slash catification
Alarm over Brexit plot to keep door open for kittens
If Bill Gates warns on catification, we should listen

November: Mass catification threatens the UK’s booming economy
1 in 9 workers are kittens
Flood of kittens ‘a catastrophe for the UK’
Farce of the kittens who fly to the UK at night

(based on front page headlines of a popular British tabloid, 20 March 2017–10 February 2018. A search of the tabloid’s archives had delivered 6071 headlines about migrants.)